US aviation has seen another new airline recently: AeroVanti. It has just commenced services and has high ambitions of growing into an established player in its market segment. With a product at First Class rates, AeroVanti is light years away from what another start-up like Breeze is trying. AeroVanti targets premium and speed. It offers private services operated by the Piaggio P.180 Avanti. Airinsight spoke to its CEO to hear more about the new airline.

It’s been a busy first week for Patrick Britton-Harr, the 37-year old CEO of AeroVanti. So busy, that he apologizes for not being able to exactly tell which was the first service by his airline on June 28.

What he knows is that since announcing the launch of AeroVanti, its mailbox and phone have been busy. “We have been taking a consistent number of enquiries each day and we are boarding members accordingly. We have members who have signed up in Texas, in Florida, Illinois, New York, we have had enquiries from California,” says Britton-Harr during a Zoom-call from Annapolis (Maryland), where his airline is based.

AeroVanti is Patrick Britton-Harr’s first adventure in the airline business. “My history was previously in healthcare and start-up organizations.” Indeed, since entering the business in 2006, he has also become Chairman and CEO of AMS Onsite and Coastal Laboratories, a company dedicated to long-term care and infection prevention.

He caught another infection himself: the passion for aviation. “I have transitioned more into the aviation side. I have been a pilot for over ten years and come off a long line of family-aviators and commercial pilots as well.” His father Steve Harr has a history as a Navy and airline pilot.

AeroVanti born out of a single-plane private fleet

Some time ago, the Harr family purchased a Piaggio P.180 Avanti for private use. The Italian aircraft has been around since 1986, mostly in Europe. It has a characteristic shape, with two push-rotors on top of the wings, a T-tail, two stabilizers at the nose, and something else: speed. It can fly at some 600 km/h or 370 miles per hour. “The first Piaggio we purchased we actually acquired as a family plane. We realized the amenity the aircraft had and its capabilities like cabin width and headroom. It’s bigger cabin than a Citation 10 was a huge attribute. We are able to fly at 41.000 feet and 460 miles an hour, which makes the world a little bit smaller,” says Patrick. 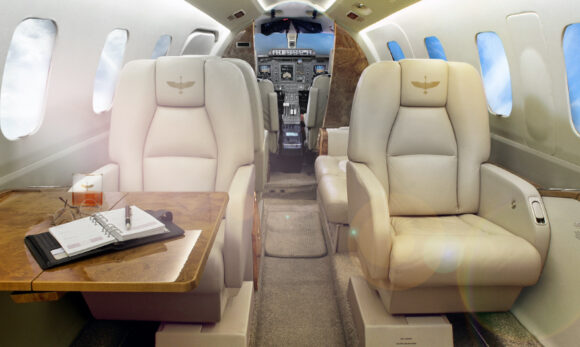 The seven-seat cabin of the Avanti is wide and spacious. (AeroVanti)

From one thing has come another. The launch of AeroVanti, a dedicated Avanti-airline offering private charter flights. It has been tried before, but AeroVanti has created its own, lean business model. “We are not the first ones to bring the Avanti into the US but what we are doing is trying to make private aviation a little bit more affordable.”

For this, you can become a member of AeroVanti for $12.000 a year, or $1.000 per month. It gives you the right to use the aircraft whenever you like to book. “We have three different membership models. We have an individual membership, which is $1.000 a month. We have a family membership which is $1.500 a month and then we have a corporate membership which is $2.500 a month. It is very much a premium product, but if you look at the costs of chartering an aircraft, there will be a lot of repositioning fees and other costs associated with a direct charter. At AeroVanti, we don’t charge these costs”, Patrick Britton-Harr explains.

Then, when you book a flight, you pay extra. “We are able to offer flights for $1.995 per hour on the East coast. When you go across to the western states, we have a $500 surcharge but no transition fees, no repositioning fees, so we provide a platform for travel conducive to quality of life.”

More expensive, but AeroVanti thinks there is a market

AeroVanti thinks there is a market for this kind of premium flying, despite the higher fares which are at First Class level of commercial airlines: “What we wanted to do is make that private aviation accessible as well as affordable. If you look at other companies out there, some fly the Beech Super King Air at $4.500 an hour and they are doing 115 miles an hour less than our aircraft. So at 115 miles faster with the biggest cabin and charging half the price, we feel this aircraft is the proper amenity.”

Britton-Harr adds another factor: private flying has become much more appealing since the Covid-crisis. “When you are traveling through an airport now, you get exposed to some 270 touchpoints where you run the risk of getting infected. Whereas when you fly on a private flight you will only have about twenty touchpoints. Due to the Covid perspective, private aviation has significantly increased.”

Who is AeroVanti’s customer? “We target families, individuals, and corporations. We are looking to bring the customer who would normally be flying first class and upgrade them into private aviation. I believe I think it will provide new options for corporations. They are doing two to three-hour flights. It opens up the door for them to bring customers flying from other areas and not having repositioning fees, which is a huge benefit. And about families and individuals, when you are flying, you want to have the flexibility of the airport you want to go into. You don’t have to go into the main commercial airports but can go to local airports that are closer to your destination. Your travel time is shorter as you don’t have to spend your time waiting in the security line, so it is really a time-saving aspect. This makes it a true win-win for our customers.” 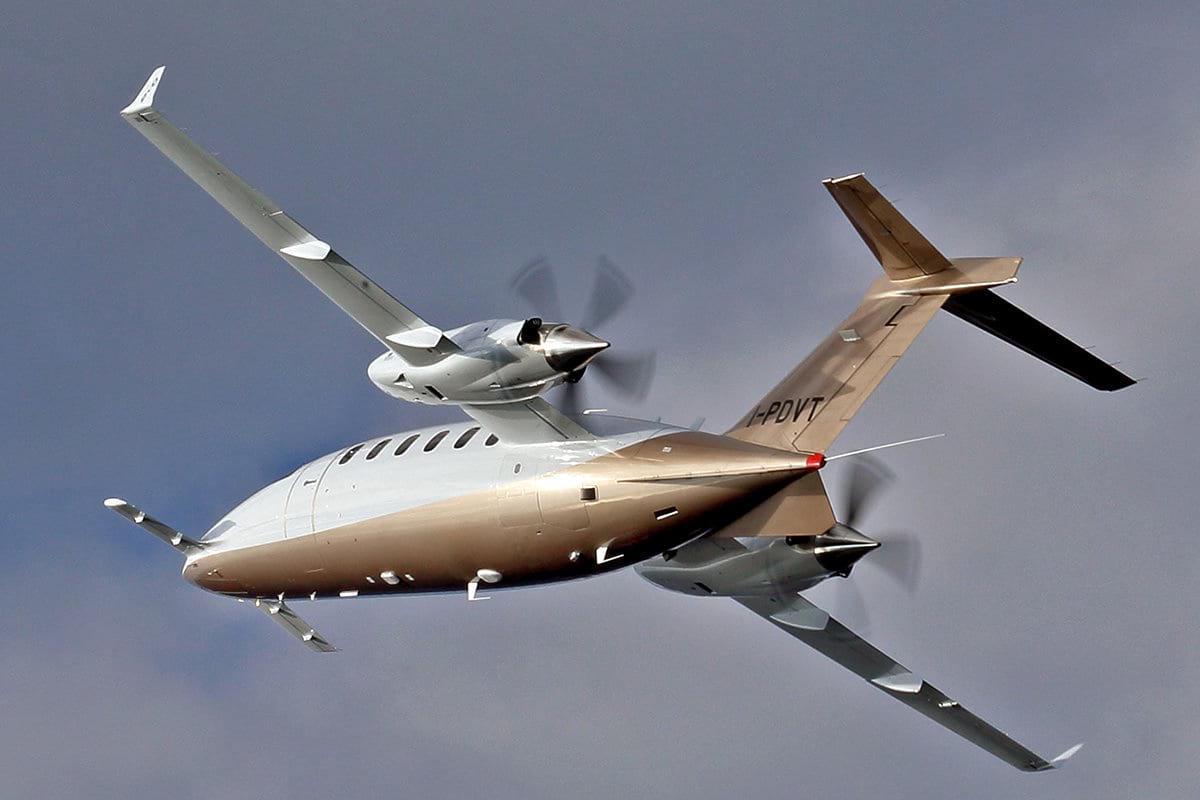 The Avanti EVO is the latest version of the P.180, which has been around since 1986. (Piaggio)

At the same time, commercial airlines have been upgrading their premium products. Take JetBlue or United Airlines, offering premium seating at much lower fares compared to AeroVanti. Patrick Britton-Harr doesn’t see them as competitors. “It is all about the individual taste. I believe we are not taking away customers in these different markets, we are serving a customer base that is not served at this moment. I believe that currently, a lot of parties that travel are being introduced to private aviation.”

AeroVanti hopes to grow the fleet to more than twenty

The start-up airline currently has a fleet of five Avanti’s. Its partner has thirteen P.180s. “And they also have a significant supply of Piaggio parts. They definitely have the largest stockpile of parts here in the US if not in the world, honestly.”

“We have aircraft based in Sarasota (Florida), Eastern Maryland, and a couple in Tulsa (Oklahoma). We will build up further operations with four in New York, three or four in Sarasota, three in Eastern Maryland. We are going to see some fifteen to twenty Avanti’s and then we would be looking to replace these aircraft with the Avanti EVOs. Hopefully, we will be able to grow our membership to grow the fleet to more than twenty.”

The Avanti EVO is the latest version with a 400 KTAS speed. “With Piaggio, we have been talking about service agreements and purchase of new aircraft in order to be able to continue developing our organization as a whole. The next step obviously is getting our current platform in place, building with our current market and customers and then to develop the next phase what would be ordering several Avanti’s”, says Patrick. “This plane is the proper plane for the mission for it. Being able to fly at that altitude and at that speed, allows you to get at your destination a lot quicker, so you are able to reach out to those targeted areas.”

While airlines like Wheels Up have become successful in private aviation, others have failed. Britton-Harr is aware of them, but the demise of companies like JetSmarter or ImagineAir isn’t scaring him away from trying his luck with AeroVanti: “I haven’t been a part of those organizations, so I can’t speculate on the reasons why they haven’t been successful. The way I look at making a business and success is by making sure we have our employees invested in our company, making sure we hire the best pilots (led by Steve Harr), and have the best customer services out there. And making sure that the customer understands the expectations of the company, just as much as we understand the expectations of the individual. So it is about being properly aligned, having your playbook set forward, and knowing everybody what those expectations are. But also be light on the management side. We don’t want to be heavy on overhead from the management, we want to be heavy on the best possible pilots and customer service so we can manage those customers’ expectations.”

Wheels Up will become a publicly-traded airline at the New York stock exchange. For AeroVanti, it is too soon to think of raising equity through shareholders. “Currently, we are a privately held company. We are not speculating right now, we are concentrating on developing our phase one structure and grow to 300 members and then grow to 1.200 members in the next several to twelve months.”